As we continue to march towards full on spring I’ve been trying to identify the trees and shrubs which come into leaf first.

Blackthorn (Prunus spinosa) cheats a bit as the flowers come out before the leaves! 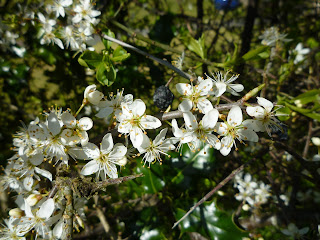 The blossom often appears in March and I have spotted large shrubs on flower for a number of weeks now. A cold spring was traditionally known as “Blackthorn winter” as the delicate flowers defied cold easterly winds and often snow. In this picture of an example in a hedge , you can spot a fruit (sloe) from last autumn still clinging on, although a bit shrivelled.
Rowan (Sorbus aucuparia) seems to be winning the race as some examples are almost fully in leaf. 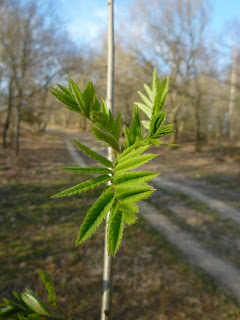 This tree is connected with witchcraft and its name is believed to be derived from the Norse word runa or charm. Apparently the tree was often planted outside houses and in churchyards to ward off witches and it was a custom to adorn doors with a spray of Rowan leaves on May Day to repel evil! The tree’s other name is mountain ash as it can thrive at altitude and on mountain sides. The red berries that appear in late August and September are rich in vitamin C and provide a source of valuable food for visiting members of the thrush family in the winter.
I have also noted a mature European larch (Larix decidua) come into leaf  – a conifer that loses its leaves each winter. Brought into Britain in the early 1600s, it is now an important tree in the forestry industry. 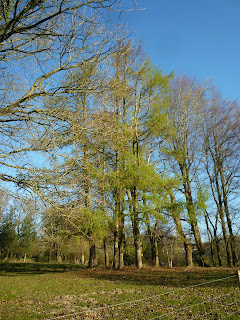 Take time to enjoy the beautiful things on show at the moment.