Last Bank Holiday – VE Day celebrations, I decided to get up early for a dawn chorus walk, so Oz and I were out by 5am on a clear morning. It’s certainly a good time of day to hear a variety of birdsong and early May is when the Dawn Chorus peaks, however the light is not good for photography, it was pretty chilly and I was bitten by midges!

I have had better views of birds in the daytime, especially this time of year when they are busy collecting food for their young and collecting nesting material.

On the way back, a group of Fallow Deer emerged crashing through the woodland, looking for somewhere to lay up during the daylight hours. 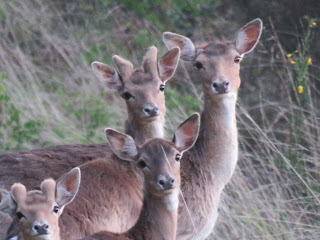 You can make out the antlers beginning to grow on the males (bucks) which will be ready for the rutting season in the autumn. Females will be giving birth to usually one fawn in June and July.
I was hoping to get some pictures of birds early in the morning, however here are some I have prepared earlier! 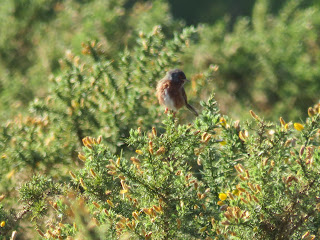 Firstly, here is a Dartford warbler (Sylvia undata), a small bird specialising in heathland habitat which can be quite showy this time of year, otherwise they flit about in the gorse and although you can hear them they become frustratingly difficult to spot! Not the best picture as it was about 40 metres away an the camera was on full zoom.
Stonechats (Saxicola torquata) become more vocal this time of year, especially if you are near their nest which usually low down in a thick gorse bush. 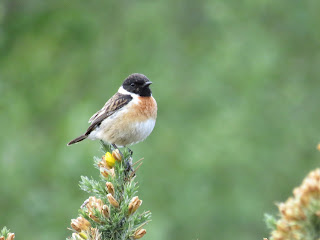 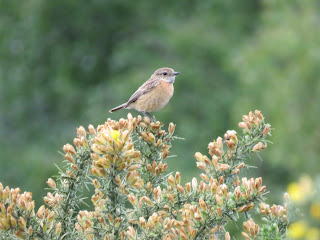 Male
Female
Spotted a common Whitethroat (Sylvia communis) singing away on top of a gorse bush which had been burnt in a large fire last year. 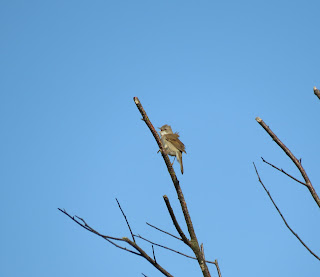 They’re quite abundant in the summer and sing throughout the day – a welcome summer visitor and a sound of spring.
I have had lots of Goldfinches (Carduelis carduelis) visit the garden this year and they seem to be be doing very well with numbers increasing generally. Such colourful birds with cheerful song which made them popular caged birds in the past. 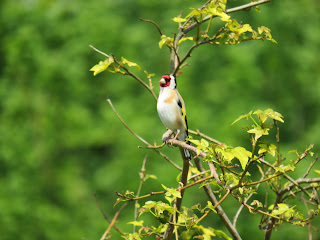 Finally, I popped by the Great tit’s nestbox that I first mentioned on 20th April and which had 6 eggs in a week later. This time (12th May) there was a clutch of baby birds, although it was difficult to count how many as they all squash down as you open the lid. 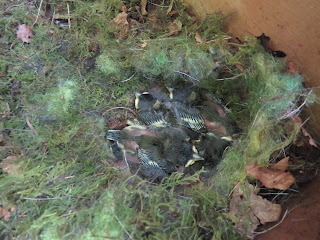 At least 6 I think?
Enjoy these wonderful spring days if you can get out.